Date Released: March 2002
File Size: 24.20 MB
Publisher: Lycos
License: Freeware
Operation Systems: Microsoft Windows
Category: Media
Versions: 1.0 – 1.96
Last Updated: January 18, 2020
Sonique Player is a Windows player capable of playing audio from a number of different file formats including MP3, Vorbis, WAV, MOD, XM Windows Media Audio, and audio CDs. The player is a highly stylized windowless interface that is fluid and fully animated and was totally unique when it first appeared.
At one time the Sonique Player was the most popular of audio players because of its freeform skins, innovated audio visualizations and very powerful equalizer. It also had an audio Enlightenment mpeg decoding engine that was developed by Tony Million. 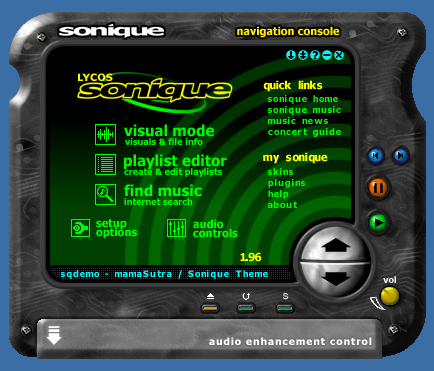 The Sonique Player really began in 1996 when a group of students at Montana State University wrote the Vibe MP3 player under the company name of Night55. They sold the rights to SGS Thompson to use in COMDEX ’98. Next they started a new MP3 Player giving birth to the Sonique Player. This first version was released in 1998.
By 1999, Night55 had been absorbed into a company called Media Science. Media Science was then sold to Lycos for $38.8 million. Lycos was then acquired by Terra Networks in October 2000.  Although a beta version of the Sonique Player Version 2 was released, because of shifts in priority this version was never completed.
Some of the main features of the Sonique Player are a full-featured playlist editor, unique output visualization modes, plug-ins, a robust control set, skins, balance adjustments, amplification adjustments, and a 20-band equalizer with spline-based level adjustments.
The Sonique Player also has four levels of sizing, large, medium, small, and tray.  It also has the ability to play all of the standard formats as well as the ability to save any audio file to the WAV format at about two times the normal play speed.
Possibly the only drawback to this player is that there is a slight learning curve. At first it might be a little confusing to get around in, but after a few days you will get the hang of it. In fact, after a few days you may find yourself replacing your current player for good.
Download
Category: Media
Tag: Old Version of Sonique Player
Recent Posts