Date Released: August 24, 2004
File Size: 0.98 MB
Publisher: Jackie Franck
License: Freeware
Operation Systems: Microsoft Windows
Category: Media
Versions: 1.0 – 1.83 SE
Last Updated: January 17, 2020
Audiograbber copies digital audio files from CDs and then performs a test to ensure the copies are perfect. With Audiograbber, you can even record vinyl records, radio, or cassette tapes to audio digital files. If you love your music and want to retain perfect copies forever, you need to download the free Audiograbber software.
Audiograbber can save the audio files into a wide range of formats that you can play on media players on your computer, or download to your MP3 player. File formats include WAV, MP3, WMA, and OGG.
Users find the Audiograbber user interface easy to navigate and appreciate the automatic features, such as the normalize feature that makes each music file the same audio pitch and loudness and the delete silences feature that allows you to delete silences from the start or end of music tracks. Audiograbber works with all CD Rom drives that can read digital audio and has a complete helpful with detailed explanations of all of the functions of this useful software. 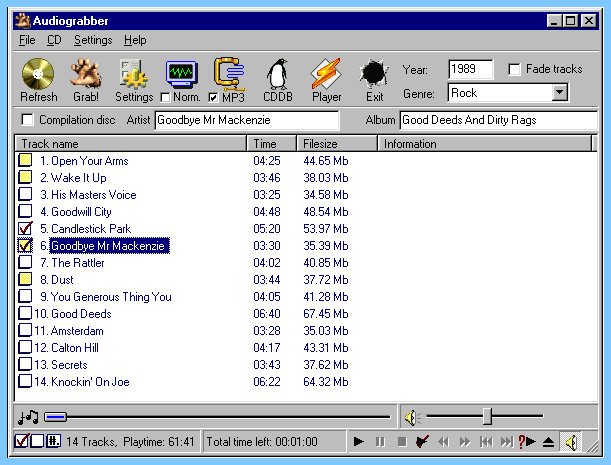 You can automatically split recordings from LPs (vinyl records) into separate tracks with the line-in-sampling function. Audiograbber also allows you to schedule recordings, so you can record your favourite radio program if you are going to be away from home. The noise reduction plug reduces the background noise on recorded tracks, so you won’t hear a dog barking in the middle of your music.
Audiograbber comes with the most common languages, but you can download other languages from the home page, making Audiograbber a true multilingual device.
The older versions of Audiograbber work on every Windows operating system, including Windows 95, Windows 98, Windows, ME, Windows NT, Windows 2000, and Windows XP.
You can rearrange the tracks order by dragging the listed tracks on the main screen of Audiograbber into your preferred order. There are controls for playing the music at the bottom of the main window, so you can actually use Audiograbber as an ordinary CD player, if you need to.
Audiograbber is a very useful tool, especially for those who want to create digital audio copies of all the other formats of music, from records, cassettes, and CDs. Convert all of your old music into files you can play on your MP3 player with Audiograbber.
Download
Category: Media
Tag: Old Version of Audiograbber
Recent Posts