Old Version of Hijack This

Date Released: May 18, 2013
File Size: 2.76 MB
Publisher: Trend Micro
License: Freeware
Operation Systems: Microsoft Windows
Category: Internet
Versions: 1.0 – 2.0.5
Last Updated: January 20, 2020
HijackThis is a free downloadable software that specializes in spyware detection and removal. Trend Micro Inc first released HijackThis as version 1.99.1 in July of 2005, and it has since gone on to become one of the most trusted methods of discovering and ridding personal computers of spyware and other malicious programs. 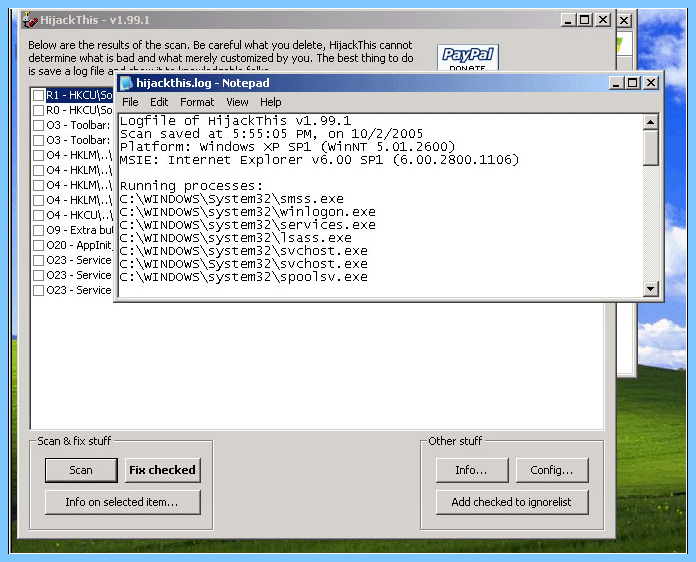 Two years after v1.99.1 was introduced, Trend Micro released v2.0.0 Beta. This update allowed the program to recognize Internet Explorer 7 as well as Windows Vista. Also included was an operation called AnalyzeThis which provides users with an easy way to look at the log file statistics. Version 2.0.0 Beta was then updated later in 2007 as an official public release known as HijackThis v2.0.2.
HijackThis is based on an interesting concept; it compares the scan of your computer against the scan of a computer that is known to be free of spyware. The results of the scan are shown in the form of a log file which can then be analyzed to determine if any harmful programs are present on your personal system.
Once HijackThis has put out a log file, users can then look through the results and spot any malicious programs. However, users of the software must be very careful when choosing to remove or disable a program through the HijackThis software, because HijackThis doesn’t clearly differentiate between good and bad programs. The software simply lists every item on the computer that is different from the spyware-free environment to which it is comparing. Only experienced computer experts should actually determine what needs to be deleted.
This should not scare away users though, because there are many websites that offer a free analysis of the HijackThis log file. Users can post their HJT log file on the website and wait for a trained expert to determine what the HijackThis software should remove.
Download
Category: Internet
Tag: Old Version of Hijack This
Recent Posts