Date Released: August 24, 1987
File Size: 209.00 MB
Publisher: Aladdin Systems
License: Proprietary / Trial
Operation Systems: macOS, Windows
Category: Utilities
Versions: 1.0 – 15.0.7
Last Updated: January 21, 2020
Stuffit is a software program that is used by Mac and Windows users to compress and archive files. It was originally developed by Raymond Lau in 1987 while he was in high school.  When the first versions were released, it soon became the dominate product on the Mac for compression.
Aladdin Systems was formed by Lau in 1988 to market and distribute Stuffit.  They split the offering into two product lines, one was Stuffit Classic which was the shareware version, and the second was Stuffit Deluxe which was the commercial version. This latter version added a quite a number of additional features and functions including better compression methods and much faster compression times. The last shareware version was 1.5.1. 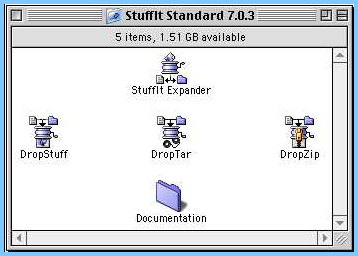 In the early 1990’s, Stuffit began to rest on its laurels and other products began to decompress Stuffit files faster than Stuffit could itself. Aladdin began a major upgrade version that included a new freeware product called Stuffit Expander. The Expander was a freeware product that would allow a user to decompress a Stufffit file. This was a very successful move and thus thwarted those who were attempting to overtake.
The first version was Stuffit to work with Windows was Version 5.5. It worked with Windows 95, 98, NT 4.0 and Windows 2000.  A completely new version of Stuffit X came to market in 2004 that was expandable and supported more compression methods including long filenames as well as Unix and Windows file attributes. It also improved its compression rate by 20%.
Because of legal reasons, Aladdin was forced to change their name in 2004. It became Allume. In 2005 Smith Micro Software acquired Allume and continues to distribute the Stuffit product line. Stuffit Version 11 was released in 2007 and it included faster compression, optimized performance on Intel Macs, and a new utility for organizing archive collections.
The latest version of the product, Stuffit 2009, came out in 2008 and added Quicklook and Time Machine support for Leopard users along with a lot of other features like duplicate folding where it will store only one copy of a duplicate file.  For one of the best compression products on the market for both the Mac and Windows, you should choose Stuffit.
Download
Please follow and like us: