Date Released: January 8, 1999
File Size: 12.70 MB
Publisher: Simon Tatham
License: MIT license
Operation Systems: Microsoft Windows
Category: Utilities
Versions: 1.0 – 0.73
Last Updated: February 1, 2020
PuTTY is a software program that allows you to work at a remote computer that uses a different operating system to your own computer at home. It is a client program for SSH, Rlogin, and Telnet protocols and you can work remotely on any computer that utilises those protocols over networks. If the remote computer you want to use is connected to your computer via a network, you can use PuTTY to work remotely on the computer.
PuTTY is a free SSH, Telnet, Rlogin and raw TCP client program for Windows. PuTTY is used to login to another computer with any operating system, send commands and work through a window in Windows operating system. Putty is a very powerful tool an secure also. The SSH connection between PuTTY and the remote pc is encrypted. PuTTY is used by really experienced PC users.
You can work on a Unix operating system with PuTTY and ask the program to connect to a computer running a Windows operating system. Everything you type into your Unix computer is shown on the Windows computer, and you will see everything on your screen as if you were actually sitting at the computer with the Windows operating system (or use a Windows computer to access a Unix operating system). 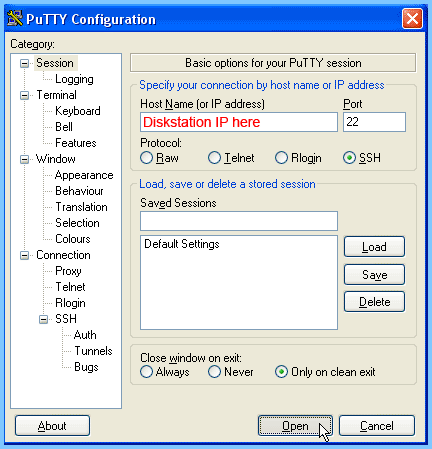 The most popular versions to download are the previous Versions 0.58 (released in April 2005) and Version 0.59 (released in January 2007). Version 0.58 has good Unicode support for international characters, so you can use version 0.58 with many languages.  Version 0.59 allows connection to serial ports, local proxying, and works faster in SSH and SFTP formats. Windows Vista users prefer Version 0.59 as the designers changed the documentation for better compatibility with Windows Vista.  The latest version 0.60 changed three minor aspects of the programming, so you can do everything you would need to do with either of these two older versions.
PuTTY has many features, including the ability for users to store hosts and preferences and control over the SSH encryption key. There are simple command lines for SCP and SFTP clients and PuTTY includes public key authentication support.
With PuTTY, you can have control over port forwarding with SSH clients, whether you are forwarding information to local, remote, or dynamic ports. PuTTY supports many programming formats including 3DES, AES, Blowfish, and Arcfour.
Check before downloading PuTTY as the program is illegal to use in some countries.
PuTTY is a program that enables users to access other computers that operate different computer systems whether the computers are local to your computer or remote. Download the older versions of PuTTY for the popular and tested versions.
All our PuTTY versions were scanned with several antiviruses before adding them on this website.
Download
Category: Sharing
Tag: Old versions of PuTTY
Recent Posts