Date Released: August 16, 1995
File Size: 231.00 MB
Publisher: Microsoft
License: Freeware
Operation Systems: Windows, Mac OS X, Solaris, and HP-UX
Category: Internet
Versions: 1.0 – 11
Last Updated: January 15, 2020
Windows Internet Explorer is a graphical web browser that is produced by Microsoft and has been included as part of their operating systems since 1995. Since 1999, it has been the most widely used browser on the market dominating all other browsers combined.
Internet Explorer was first developed in 1994 when Microsoft purchased the rights of existing code from Spyglass, Inc.’s Mosaic which was an early web browser. Internet Explorer was first released as part of an add-on package called Plus! For Windows 95. Then, later versions were available as free downloads as well as in operating system service packs.
Internet Explorer is designed to view a wide range of web pages and has introduced an even wider range of extensions and innovations over the years. Many of these innovations have been adopted by other browsers as well as by the W3C standards committee.
Internet Explorer uses an architecture that is made up of modular components and because of this it is able to expose areas of its infrastructure so that other components can be created to extend the functionality of the browser and make it more extensible. It uses a zone-based security framework to allow you to control how you manage your security while surfing the web. 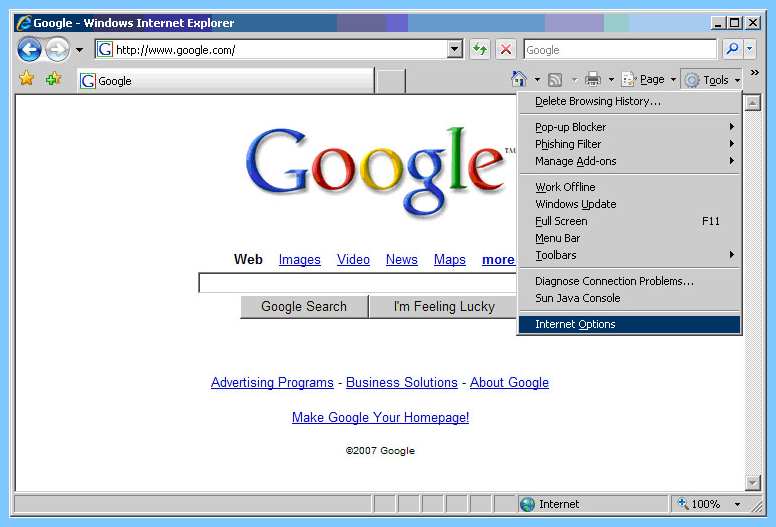 The first version of Internet Explorer debuted in August 1995. Version 2 quickly followed being released with Windows 95, Windows NT 3.5, and Windows NT 4.0 in November of 1995. This second version added SSL, cookies, RSA, and newsgroup management.
Version 3 was released in August 1996 and had been recoded without the Spyglass source. It also added CSS support, ActiveX controls, and Java applets. Version 4 was released in September 1997 and added Group Policy allowing companies to lock down aspects of the browser and added improved NetMeeting features.
Internet Explorer Version 5 was released in March of 1999 and supported bi-directional text, XML, XSLT, and the ability to save web pages in MHTML format. Version 6 was released in August 2001 and it included DTHML enhancements, content restricted inline frames, and Windows Messenger integration.
IE Version 7 was released in October 2006 and added tabbed browsing, multiple-engine search box, a web feeds reader, international domain name support, and anti-phishing filters. IE Version 8 was released in March of 2009 and added support for accelerators, WebSlices, and InPrivate privacy features.
The finale version Internet Explorer 11 is featured in Windows 8.1, which was released on October 17, 2013.
Internet Explorer is the most used Web browser in the world. It’s included in the Windows OS package as it’s the default web browser. Internet Explorer is an intuitive software that is also secure and with a good configuration that also can be a very stable and trustful tool that helps you to surf the net and much more. Coming with version 11 it integrates a security filter and a pop up blocker and also many other helpful features. It is used and trusted by many PC users worldwide so we also recommend it.
Internet Explorer won the browser wars in the late nineties, and while other browsers still compete in the market for your attention, it is Internet Explorer that still holds the top slot.
Download
Category: Internet
Tag: Old versions of Internet Explorer
Recent Posts