Date Released: December 1, 1998
File Size: 46.70 MB
Publisher: AbiSource
License: Freeware
Operation Systems: Microsoft Windows and Linux
Category: Utilities
Versions: 1.0 – 2.8.6
Last Updated: January 28, 2020
Many people around the world have discovered the joys of using AbiWord, a free software program that gives users all the features of Microsoft Word without the bugs or the cost.
Originally developed by SourceGear, AbiWord is the word processor component of an open source office project. A developer community took over the project from SourceGear and released AbiWord Version 1.0 in April 2002. Version 2.0 was released in September 2003, 2.2 in December 2004, 2.4 in September 2005, and the developers released version 2.6 in March 2008. 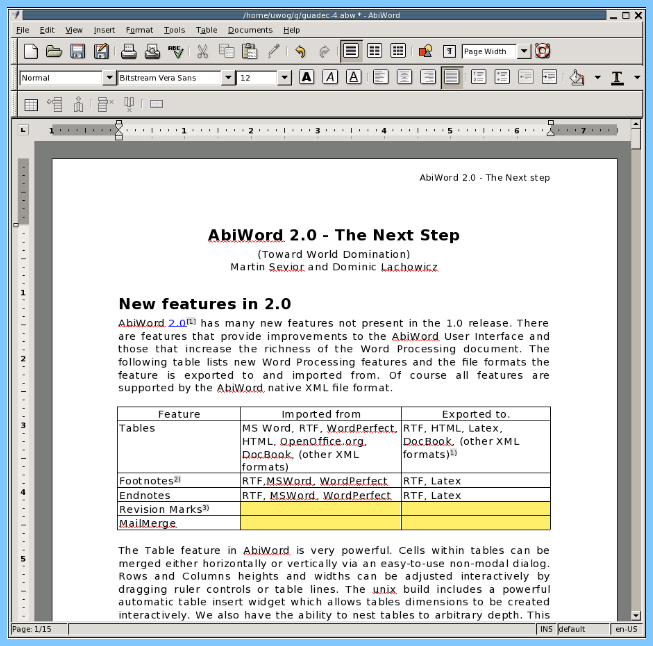 Previous versions provide a stable word processor that you can use on just about any computer operating system, including Linux. The majority of users have UNIX systems, Windows 95 and later versions of Windows, QNX Neutrino 6.2 and MacOS CX. The latest version 2.6 does not support Windows 95 or 98, so you will need to download a previous version to use AbiWord with your computer operating system if you use either of these older versions of Windows.
AbiWord has all the important features any word processor needs including lists, indents, footnotes, multiple views, spell checker, templates, page headers and footers, styles, tables, and full screen presentation. AbiWord is a faster word processing software than others that are loaded with features that the majority of word processors do not use. It also uses less system space and memory than feature rich Microsoft Word does.
You can use AbiWord with any language as the support codes allow for internationalisation. AbiWord imports files from Microsoft Word and other word processing programs, so if you receive emails with word attachments you will not have any problems in reading those files.
Since AbiWord uses a similar user interface to classic versions of Microsoft Word, so you will find AbiWord easy to use. The user interface also converts to whatever operating platform your computer uses, so that the buttons, tool bars, and features are familiar to you.
AbiWord is a great free software program that gives you all the basic features any word processor needs, without taking up a lot of system space or causing problems with the interactions between your computer’s operating system and the software. AbiWord is easy to use and has all the features you really need.
Download
Category: Utilities
Tag: Old Version of AbiWord
Recent Posts