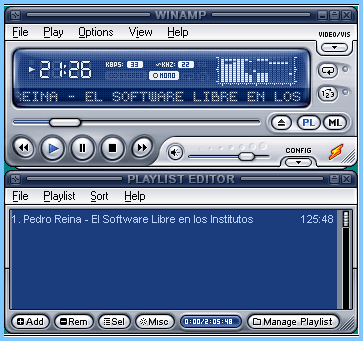 Winamp 2.95 remained in concurrent development with Winamp 3 for quite a while, as 3 lacked compatibility (and even functionality) with many things users had come to love in Winamp 2: many Winamp 2 only skins, various plugins, and SHOUTcast internet radio support.
Luckily, the Nullsoft team addressed these concerns with Winamp 5, the followup to Winamp 3. The team half-jokingly skipped Winamp 4, citing peoples’ concerns about the disparate features between Winamp 2 and Winamp 3, and so they decided to release something that combined the strengths of the two (2+3=5).
Winamp 5 comes with a variety of skins and a much fuller feature set than any of the previous major versions. It supports music ripping and CD burning, and (Pro-version only) also features MP3 encoding, enhanced Windows Vista Aero support, among a few other neat things.
From Winamp 5.8 and onwards, Winamp fully supports iPod synchronization – crucial to many people with mobile media devices these days.
The Nullsoft team released their 10th Anniversary Edition of their software in 2007; Winamp has been now been around for 10 years and is still going strong. It has strongly influenced the direction many other popular media players have taken: iTunes, XMMS, and especially Foobar2000 have all borrowed from the Winamp model.
Who knows what direction the Winamp team will take it next? Maybe it will be Winamp 6.0…
Download
Category: Media
Tag: Old Version of WinAmp
Recent Posts