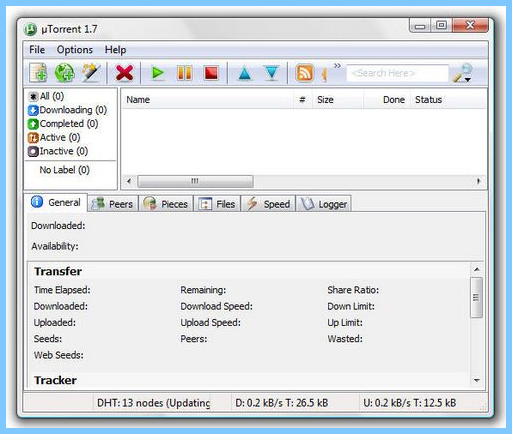 uTorrent was first released in beta mode late 2005, with this original version only taking up 91 kB. This tiny file size illustrated one of uTorrent main ideals, namely to provide a useful service that will not take up excessive space on the user’s computer. Successive releases of uTorrent have kept up this standard, making uTorrent a very popular method of downloading information using BitTorrent protocol.
One of uTorrent major features is its ability to download multiple files at the same time. This simultaneous downloading enables users to accomplish tasks faster than other BitTorrent clients.
Another popular feature of uTorrent is its Peer Exchange network which allows users of the software to exchange information with other uTorrent users. uTorrent’s peer-to-peer sharing network is second only to Limewire in terms of popularity. This Peer Exchange feature allows users to share files and information not just with uTorrent users but with anyone who is using any type BitTorrent client.
In keeping with popular demand, uTorrent also offers a downloader that is capable of using RSS feeds. This broad catching system provides users with a way to keep track of RSS feeds and easily gather together information from a broad range of sources.
Users of uTorrent will be impressed by its wide variety of features, and surprised by its little file size. In a market filled with many different BitTorrent clients, uTorrent is a front-runner in almost every aspect. On December 7, 2006 the code has been the property of BitTorrent, Inc and some people claims that this program is not the same and because of the closed source uTorrent may have been modified to spy on users on Peer factor’s behalf.
Download
Category: Sharing
Tag: Old versions of uTorrent
Recent Posts