Date Released: 22 April 1995
File Size: 34.70 MB
Publisher: Eugene Roshal
License: Trialware
Operation Systems: Microsoft Windows, Linux, UNIX, MacOS, FreeBSD, etc.
Category: Utilities
Versions: 1.0 – 5.80
Last Updated: January 21, 2022
WinRAR is one of the most used archiving utility, it supports a lot of file formats such as RAR, Zip, CAB, ARJ, LZH, TAR, GZ, ACE, UUE, BZ2, JAR, ISO, 7Z and Z archives also. It makes very small archives saving your disk space, it can also protect your files adding them passwords and encrypting your files with a 128 bits key. It has a friendly interface that is very easy to use by anyone. It has the ability to reconstruct damaged archives. With WinRar you can create self-extracting and multivolume archives.
WinRAR is a 32-bit and 64-bit Windows version of the RAR Archiver. RAR is a proprietary archive file format that supports data compression and file spanning. RAR compression is slightly slower than standard ZIP, but the compression is 8 to 15% better than ZIP compression and can be as much as 50% better than other schemes. 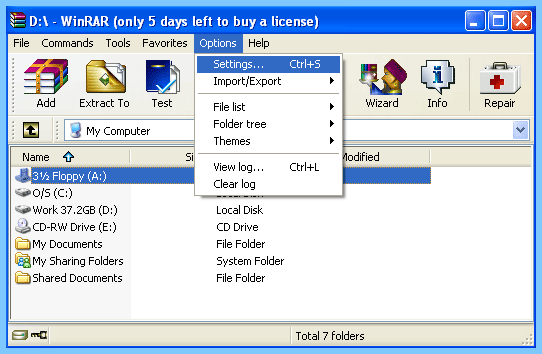 WinRAR has strong general and multimedia compression capablities. It contains ZIP compression and decompression, and it can also process other non-RAR archives formats such as TAR, ACE, BZ2, JAR, and ISO. It supports long file names. It can produce self-extracting archives, and it can convert other formats to RAR. One thing to keep in mind that some of the older versions can not extract the newer version RAR files.
While some people think that the WinRAR interface is too basic, sometimes simple is better. If you want to you can also get skins that will allow you to change the look of the program and give it more pizzazz.
While WinRAR has been around for a while some of the milestones for this product include Version 1.54 adding support for Windows 95. WinRAR Version 2.9 introduced the new RAR3 format that improved the file extension naming when spanning multiple files and it upgraded the encryption algorithm to AES. Version 3.7 added Windows Vista compatibility changes as well as adding better ISO imaging of DVD disks.
Version 5.80 added high DPI display modes compatibility with the WinRAR tray icon. Version 5.80 extended abilities for ZIP archives containing Unicode file names in UTF-8 format, improved Unicode support for RAR and ZIP archive names, and added decompression support for WinZip AES encrypted ZIP archives.
Version 3.60 beta 6 has a Local Stack Overflow Exploit and a Stack Overflow Exploit PoC inside; version 3.4.1 has a CorruptZIP File Vulnerability PoC inside; version 3.30 has a Long Filename Buffer Overflow Exploit ; version 1.0 has a Local Buffer Overflow Exploit inside so we will avoid to list them on our website.
WinRAR is one of those programs that you need if you have a computer system. It is reliable, practical and will do a better job than almost any archiver on the market. If you need to archive your files then you should definitely try WinRAR.
All WinRAR versions listed here were scanned with several antiviruses before adding them on this section.
Download
Category: Utilities
Tag: Old WinRAR
Recent Posts