Date Released: May 1997
File Size: 77.80 MB
Publisher: AOL
License: Freeware
Operation Systems: Microsoft Windows
Category: Chat
Versions: 1.0 – 8.0.0.8
Last Updated: January 28, 2020
AOL Instant Messenger (AIM) is an instant messaging and online presence program that allows users to communicate in real-time over the internet. It was first released in May of 1997 and gained a rapid following because of its ability to allow users to communicate easier than ever before.
AIM is a free chat utility created by AOL. AIM has support for Google talk and Facebook so that you can chat with all your friends on different networks. AIM is a small application with an nice interface and many useful features that allow you to customize your profile, get updates form all social networks, allows status messages, allows you to search the web and it also comes with lots of funny emoticons. AIM allows you to sign as invisible and search your friends. 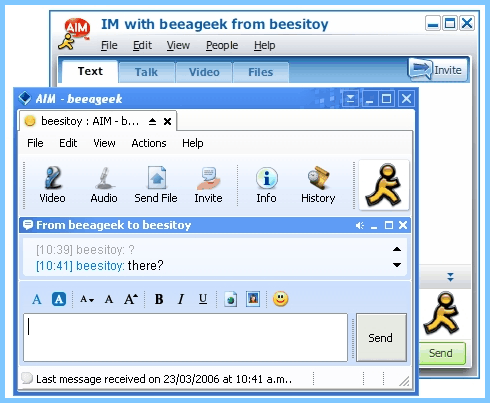 AIM was developed by AOL in 1994 and released internally to its employees in 1995. The original concept concerned the employees at AOL because it allowed people to know when they were online. The program gained the nickname ‘The Stalker’. By 1997 AOL had decided to make AIM available to their subscriber base, and this first version became hugely popular.
What can you do with AIM? One of the most popular features of AIM was its ‘buddy’ list. With AIM you can import and create buddy lists from services like Yahoo!, Hotmail, and Outlook. You can then place them into groups like ‘Family’, ‘Co-workers’, or ‘Friends’. You then use these lists to keep in contact with your buddies.
AIM gives you the ability to send a text message to someone, connect to their online presence, start a video conference, or send and share pictures. If the person is not online, then you can send messages to their cell phone, or even use your cell phone to receive messages.
AIM plug-ins give you the ability listen to music, find videos on the internet, play games, listen to the radio, translate text messages to other languages, monitor RSS feeds, find shopping bargains, and much, much more.
AIM Version 2 introduced person-to-person instant messaging, chat-room messaging, and the sharing of files. Version 4 added the ability to store a list of up to 200 contacts as well as the ability to play games against other users in real-time online. Version 5.5 allowed Microsoft Windows users to video conference with each other as well as with users of Apple’s iChat.
Version 6.0 overhauled the user interface making AIM easier to use. It also added the ability to connect to AIM pages, send messages to offline users, as well as opening up AIM to developers to allow for the creation and use of plug-ins.
The newer versions give you a lot of extras that will enrich your AIM experience, but even the older versions can help you communicate and keep up with your buddies no matter where they are in cyberspace.
All our AIM versions were scanned with several antiviruses before adding them on this website.
Download
Category: Chat
Tag: Old versions of AIM
Recent Posts