Date Released: July 2, 2004
File Size: 9.75 MB
Publisher: Kevin Hearn
License: Freeware
Operation Systems: Microsoft Windows
Category: Sharing
Versions: 1.0 – 3.53
Last Updated: February 1, 2020
WinMX is a file sharing program based on a peer-to-peer (P2P) technology. It was originally created by Frontcode Technologies. It runs on the Microsoft Windows operating system and in 2005, it was the number one source for online music with an estimated 2.1 million users. The official website has been down since September 2005 due to a lawsuit but even so, the product remains supported through third-party modifications.
When the early versions of WinMX were first released in 2000, they used OpenNap servers for their P2P structure and as such needed this community to grow on. When the RIAA sent legal notices to OpenNap server operators to cease and desist, the P2P world collapsed leaving WinMX out in the cold. 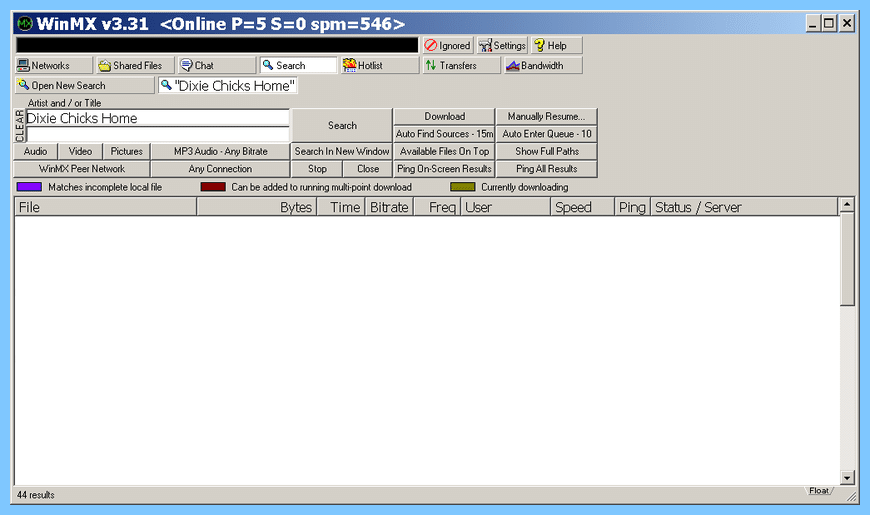 To survive, WinMX released version 2.5 in May of 2001. This version introduced WinMX Peer Networking Protocol (WPNP). This was just the spark that it needed to revive the P2P renaissance. By the release of Version 2.6, there were over 1 million simultaneous users back on WinMX.
By using WinMX, people can share a large variety of files including music, video, images, text, and archive files. There are limitations on the size of files allowing up to 2 GB. While there is no limit on the number of files that are shared, there is a limit on the number of files that can be browsed at one time. This is 5000 for a primary connection and 3000 for a secondary connection.
Along with searching and sharing files, WinMX also provides chatting capabilities. A user can host a chatroom that allows users to send messages to each other privately or publicly as well providing a mechanism for blocking users from communicating.
The last official version was 3.54 which was release in the second half of 2004. After that, the program updates have mostly been patches. But for those who continue to use it, WinMX is still the best P2P file sharing program available.