Opera Mini also is known for its ability to be used on PDAs and smartphones. Extensible Rendering Architecture reformats web pages to better fit the display screen of almost any handheld device. This one-of-a-kind technology sets Opera apart from the crowd and gives them a strong hold on the growing market of portable internet connectivity.

Opera Mini really introduced itself to the general public in 2005 with the release of Opera Mini designed for the Java ME platform. This edition turned the program from trialware into an ad-based freeware that allowed anyone to use it without cost. This release also included features such as integrated instant messaging and hotlist panels. Later releases updated features and expanded on services offered, until Version 4 was released in 2007. This edition got rid of all advertising banners and made the program completely free to use. The Opera Mini 56 was released in 26 May 2021. 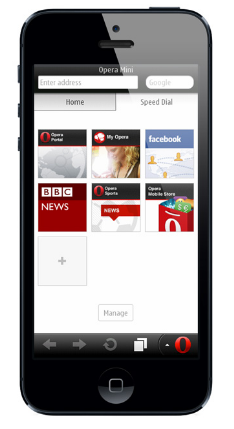 One of the most attractive features of Opera Mini is its ability to be used on nontraditional platforms. Mobile systems such as Android, Windows Mobile, BlackBerry, Symbian, and Java ME are only compatible with Opera web browsing software. Users can download specific old versions of the Opera Mini software for these mobile systems.