Date Released: April 11, 2005
File Size: 85 MB
Publisher: Firebird Project
License: Freeware
Operation Systems: Windows, Linux, and macOS
Category: Internet
Versions: 0.7 – 3.5
Last Updated: January 12, 2020
Built on Mozilla’s codebase, Flock is a Web browser that specializes in providing social networking and Web 2.0 functionalities into its user interface.  The Flock browser runs on the Microsoft Windows, Mac OS X, and Linux platforms, and is available in many different languages.
Unlike other browsers which just take you places and show you things, Flock works by helping keep you informed. It is equipped to let you know when your contacts from Facebook, MySpace, Flickr, Twitter, and other social sites are updated to help keep you informed. 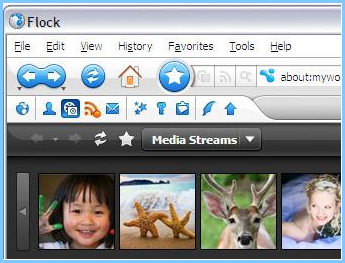 Flock contains most of the standard features that are included in other browsers such as tabbed browsing, security, and an integrated search engine. It also contains other tools that will help you share links, photos, videos, or just about anything else that you want to share.
Because it is built on the same codebase version that Firefox is built on, its look and feel, as well as its behavior, will be familiar to most users. It supports most of the same extensions that Firefox does and therefore is extensible.
A preview version was shown at TechCrunch and it received rave reviews. Then Flock Version 1.0 was released in October 2007. This version introduced the sidebar social networking integration that contained support for Facebook, Flickr, Twitter, and YouTube.  This version also added a Web Clipboard that allows users to drag and drop anything they need to the sidebar.
Flock Version 3.5 converted it’s codebase to the new Firefox 3 foundation to take advantage of all the features that this version contains. It also ensured the availability of the new add-ons available for Foxfire are functional in Flock. It also added the ability to receive image and video feeds.
But the real reason to get the Flock browser is for its social network sidebar. The buttons at the top make it snap to access your social network sites.
Each of the buttons help you get your message out, as well as keeping up with what your friends are doing. If you are into serious social networking, then Flock is the social network browser for you.
Download
Category: Internet
Tag: Old Version of Flock
Recent Posts