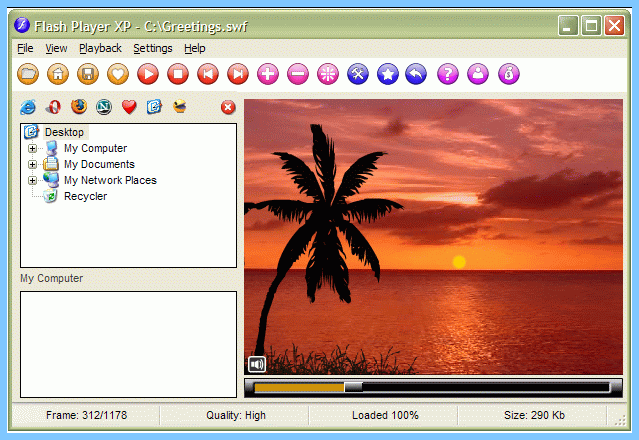 Flash Player was originally developed to display 2D vector animation, but over the years and through the various versions it has evolved into a platform for distributing RIA, streaming video, and streaming audio. Flash Player is available for Windows, Linux, Solaris, and Mac.
While the original version of Flash was called Future Splash Animator, when it was sold to Macromedia in 1996, it became Macromedia Flash 1.0. It was not until 1997 when Version 2 was released that it began to take off. Version 2 added buttons, stereo audio, tweeting of color changes, and enhanced bitmap integration.
Version 3 which was released in 1998 added alpha transparency, MP3 compression, simple script commands, and enhanced animation, playback, and publishing abilities. In 1999, Flash Player Version 4 reached 100 million installations. This was mostly because of its inclusion with Microsoft Internet Explorer 5 and in this version it saw the addition of streaming MP3’s and motion tweeting.
Version 5 of Flash Player was released in August 2000. Here it added a major advancement in its scripting abilities with ActionScript, an internal scripting language. In March of 2002, Version 6 was released and it added support for Flash Remoting and the Web services protocol SOAP. It also added Flash Video, shared libraries, and accessibility.
Version 7 was released in September 2003 and added charts and graphs, text effects, high-quality PDF and ActionScript 2.0. When Flash Player
Version 8 was released in August 2005, it added filter effects, blending modes, GIF & PNG support, and a mobile device emulator. This was the last version of the Flash Player that was distributed by Macromedia. Adobe Systems purchased the company in December 2005.
Version 9 was released in June 2006 and added support for binary sockets, regular expressions and ActionScript 3. There were also several sub-versions that included minor updates and critical security patches. In October 2008, Version 10 was released an it added 3D object transformation, custom filters via Pixel Bender, advanced text support, and Dynamic sound generation.
The latest and stable release 32.0.0.303 published on December 10, 2019. In 2017, Adobe announced that it would end support for Flash Player at the end of 2020.
It comes down to this, if you want to put dynamic content on your website, there are many items that have been created in Flash. If you want your visitors to view that content, then they must have the Adobe Flash player.
Download
Category: Internet
Tag: Old Version of Flash Player
Recent Posts