Date Released: January 9, 2001
File Size: 1.79 GB
Publisher: Apple Inc.
License: Freeware
Operation Systems: Microsoft Windows and macOS
Category: Media
Versions: 1.0 – 12.10.3
Last Updated: January 18, 2020
iTunes is a software program that you can use to play and organise your digital music and video files on your computer and on Apple’s iPod players. Mobile phones can also use the application to download songs through iPhone. Most people want the iTunes program to interface with the iTunes Store online where you can purchase and download ringtones, podcasts, music, television shows, iPod games, audio books, and even full length movies.
Apple Incorporated released the first version of iTunes in 2001, and consequently changed the way the modern world plays music. Since then there have been at least 8 versions of the software released, not all of which are compatible with all computer operating systems. You need to download older versions of the software for Mac OS 9, Mac OS X versions 10.0 to 10.3, and Windows 2000. If you run Linux as your computer’s operating system, you will need Wine – an interface program with Windows compatibility. 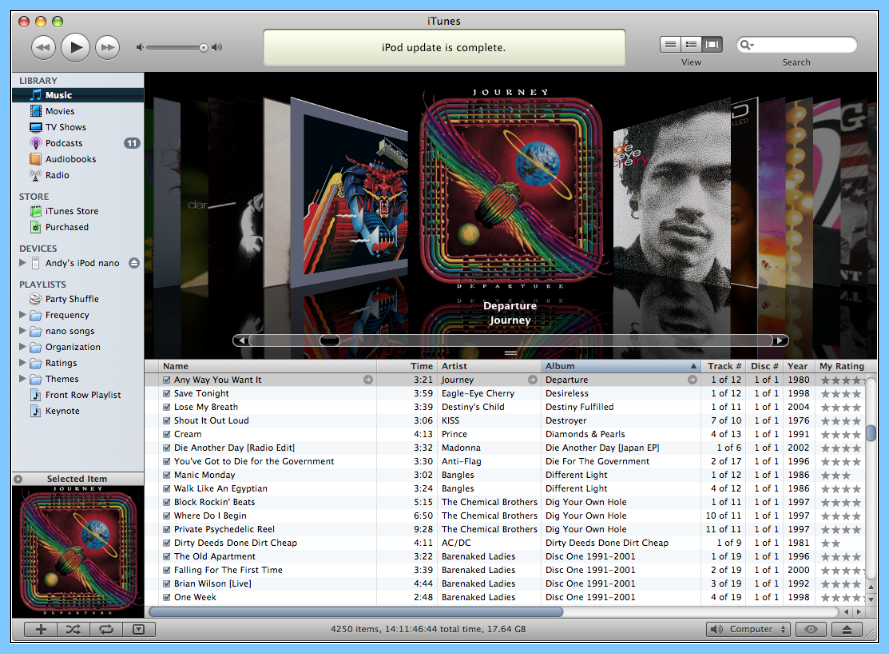 One of the popular features for music lovers is the smart playlists introduced in Version 3 of iTunes. These playlists automatically filter the library based on personalised selection criteria, so one user can specify a range of heavy metal songs and another can request the iPod or computer to play songs from a range of swing classic music hits, all from the same library of iTunes.
Apple introduced the “Party Shuffle” playlist with an older version of iTunes – Version 4.5. This allows the computer or the iPod to randomly select the tracks to play from the library, or from specific playlists, rather than just playing the tracks in order, as you had to do on old technology such as records, tapes, or even CDs. Users can veto a particular selection and iTunes will randomly select another track.
iTunes Version 4.8 introduced video support, allowing users to catalogue movie clips in the iTunes Library. You can view the movies in a small screen from the main iTunes display, or on the full screen. Previous versions to Version 7 can still store and organise the video clips, but you may not be able to distinguish easily between audio and video files in the file list, as Apple created new icons for Version 7.
iTunes 6.0 added support for viewing video content, movies, and television shows purchased from the iTunes Store. You can download and play hundreds of television programs and full length movies using iTunes software.
iTunes is now an essential software program for the majority of computer and iPod users who love the ease of downloading, cataloguing, playing music and videos.
Download
Category: Media
Tag: Old Version of iTunes
Recent Posts