Date Released: 15 February 1996
File Size: 492.00 MB
Publisher: The GIMP Development Team
License: Freeware
Operation Systems: Linux, macOS, Microsoft Windows, BSD, Solaris
Category: Graphic
Versions: 1.0 – 2.10.14
Last Updated: January 27, 2020
GIMP is a free photo manipulation tool that is also very powerful and has lots of useful functions. It is compatible to almost all types of photo files and has a lot of useful tools that will help you to complete your tasks. It can be used to manipulate or to retouche images with the help of it’s useful gadgets like: painting tool, transforming tool, selection tool and many others. GIMP has a very intuitive and friendly interface that makes it very easy to use by beginners and by experienced users also. It has also a lot of helpful plugins available for you to download to add new effects or to read more file formats.
You can create graphics, design logos, re-size and crop photos, combine images together, remove parts of an image, enhance photos, and create animated images using the freeware GIMP (GNU or General Image Manipulation Program). While often suggested as a free application to replace the expensive Adobe Photoshop program, GIMP’s designers did not set out to design a Photoshop clone and GIMP has a different user interface system. GIMP does not support the Pantone colors, but can do everything else Adobe Photoshop can. 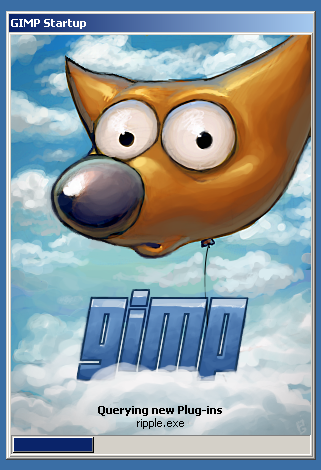 GIMP is easy to use with simple tools to manipulate images and photos. GIMP provides the complete suite of typical painting tools including pencil, brush, airbrush, clone, and a gradient editor that is excellent. Advanced users will appreciate the options provided by layers, channels, and the unlimited redo / undo options. Only the available memory space in your computer system will limit GIMP’s performance, so you can easily have several images open at the same time.
Other tools available in GIMP include transformation, a variety of selection tools, and a foreground extraction tool which allows you to cut the background away from a selected image. Animators will appreciate the layer format and the frame navigator, allowing easy changes to the animation frame by frame. GIMP allows users to alter the format of images and can load, display, and convert an image into bmp, gif, jpeg, pdf, tiff, mng, png, psd, tga, and many other recognised formats.
Downloading older versions of GIMP will not cause your computer any problems. While the recent release has an updated user interface, mimicking Photoshop to make it easier for those used to Photoshop, all the tools you will need are available in the previous versions of GIMP and it is still easy to use.
The major versions and changes throughout GIMP’s 12 year history include:
✓ 2.0 (Released March 2004) included new tool options, CMYK color support, and a tool to alter already created text.
✓ 2.4 (Released October 2007) provided color management support, scalable brushes, and full screen editing options.
✓ 2.6 (Released October 2008) has only changed the user interface and the icon design for the tools.
You can download GIMP software as a free alternative to Adobe Photoshop and be able to manipulate images just as you need to. Since the only difference in the latest version is the way the user sees the tools icons, you can easily download previous versions of GIMP without any problems.
All GIMP versions listed here were scanned with several antiviruses before adding them on this website.
Download
Category: Graphic
Tag: Old version of GIMP
Recent Posts