Date Released: December 20, 1998
File Size: 235.00 MB
Publisher: DivX, Inc.
License: Freeware
Operation Systems: Windows
Category: Media
Versions: 1.0 – 10.8.7
Last Updated: January 17, 2020
DivX Player is a very nice media player that plays every DivX video ever created including almost all video formats. It has a various menu with lots of features that allow users to: queue, pause and progressively play video downloads, organize your divx movies, create you own playlists, burn your favorites movies on cd-s and lots of other exciting features. DivX is a codec which became popular because of its ability to compress lengthy video segments into small sizes while maintaining high visual quality. It is one of several codec’s that are associated with ‘ripping,’ a process of copying audio or video to a hard drive.
If you are looking for a free an stable media player with lots of useful features and also a user friendly interface your choose is for sure DivX Player. Keep in mind that this is not the DIVX that was developed by Circuit City for a video rental system. In fact early versions of DivX were branded with a winking emoticon ‘DivX;-)” which was a reference to the defunct Circuit City product. 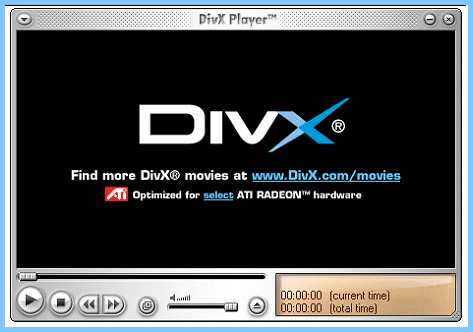 The DivX Player is a standalone media player for DivX encoded video. It lets you watch videos from within your browser. The DivX codec has somewhat of a controversial history. The first version was released in 1998 and it is listed as version 3.11 Alpha. It was created from an illegally hacked MPEG-4 video codec. Its release was supposedly in response to the Circuit City DIVX product.
In October 1999, the DIVX website went dark. There were no new posts to the site until February 2001, when the DivX Corporation took it over. The DivX Corporation had created a clean room codec from the OpenDivX product. This new, legal version was christened Version 4.
DivX Version 5 was released in May of 2002. Along with introducing the Web Player, it offered improvements in codec efficiency.  In December 2005, version 6.1 was released and it included improved B-frame decision, improved rate control for very high bitrates, and better Japanese encoder translations.
Version 6.0 was released in December 2005 and it introduced features to let you configure the encoder based on your preference for encoding speed and video quality as well as MMX optimizations for the MPEG quantization method.  Version 6.5 was released in May of 2006 and added system preference pane as well as upgrading the DivX Web Player. Version 6.6 updated the Web Player for in-product help, community links, and better maneuvering within a video. Version 6.7 has a SRT File Subtitle Parsing Buffer Overflow Exploit inside and also a File Buffer Overflow PoC; Version 6.6.0 has a SRT File SEH Buffer Overflow Exploit and an ActiveX Set Password Denial of Service PoC inside also. We did not consider these versions safe and we choose to avoid listing them on our website.
Version 6.7, released in September of 2007 added support for formal 1080HD profiles, support for additional aspect ratios common in HDV and AVCHD, as well as the fastest video decoder. Version 7 was released in January 2009 and added HD playback on popular media players such as RealPlayer and Windows Media Player.  If you have your own videos that you want to share on your blog, website, or social networking site, then the DivX Web Player may be all that you need to share them.
All our old DivX Player versions were scanned with several antiviruses before adding them on our website.
Download
Category: Media
Tag: Old version of DivX Player
Recent Posts