Date Released: May 28, 2000
File Size: 133.00 MB
Publisher: The Audacity Team
License: Freeware
Operation Systems: Windows, macOS, Linux, other Unix-like systems
Category: Media
Versions: 1.0 – 2.3.3
Last Updated: January 17, 2020
Audacity is a software program that allows users to record, play, and edit sounds. You can import and export WAV, AIFF, and MP3 files and versions of Audacity are available to suit Microsoft Windows, GNU/Linux, BSD, Mac OS X, and other computer operating systems.
Audacity is a free audio files editing software. Audacity is an intuitive application that allows you to cut, copy, save, slice audio files, add special effects or change the speed of songs. Audacity can be also used to record live audio or to convert tapes and records to MP3, WAV or AIFF sound files. This is a great free tool that can be very useful anytime. We appreciate the great interface and the useful functions and the fact that Audacity is an open source software also. 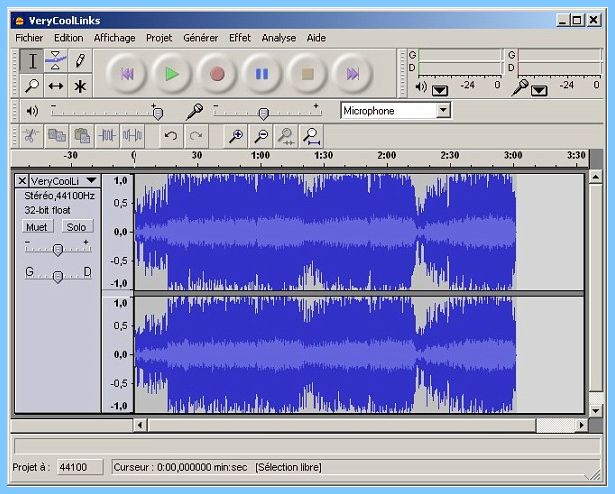 Although the latest version of Audacity, 1.3.7 (Beta), is available, most users should download the previous version of Audacity, 1.3.6. This is because the 1.3.7 version is still a work in progress and does not come with the complete documentation or translations into foreign languages, so it really is only suitable for advanced users.
The older version of Audacity 1.2.6 is complete and fully documented, and is a stable, well-recognised version. More than 54 million users worldwide have downloaded this version of Audacity, which is no surprise as it won the SourceForge.net 2007 Community Choice Award for the Best Project for Multimedia.
Features of the older versions of Audacity include:
✓ the ability to mix tracks together;
✓ a built-in amplitude envelope editor;
✓ a frequency analysis window;
✓ a customisable spectrogram mode;
✓ Bass boost;
✓ Wahwah effects; and
✓ Noise removal.
The previous version of Audacity provides support for Windows NT, and 95, which are not compatible with the recent release. Audacity enables users to mix sounds by simple cut, copy, and paste tools, with the popular unlimited undo tool, so you can easily make the sounds just as you need.
If you are creating sound for e-learning purposes, Audacity is the perfect tool for you. You can adjust the audio’s speed while maintaining pitch to enable precise synchronisation with video links. This means you have the audio track providing the explanation for what users are seeing on the video, and can synchronise the audio exactly with the video.
You can use Audacity to provide a professional finish to all types of audio files, including pod casts. You can add effects like fading in, fading out, trimming, and deleting background noises.
Audacity is a terrific, easy to use and install, free software program. Unless you are an advanced user though, the manufacturer recommends downloading the previous version because it is more stable and has complete documentation and certification as a software program.
As you can see we will list on this page old versions of Audacity that are clean and free to use.
Download
Category: Media
Tag: Old version of Audacity
Recent Posts