Date Released: March 19, 2007
File Size: 133.00 MB
Publisher: Adobe Systems
License: Freeware
Operation Systems: Windows, Linux, Mac, and Android
Category: Internet
Versions: 1 – 34
Last Updated: January 11, 2020
Adobe AIR (Adobe’s Integrated Runtime) is a cross-platform environment for building Rich Internet Applications using Adobe Flash, Adobe Flex, HTML, or Ajax, and then it deploys it as a desktop application.
AIR is a runtime environment that allows Web based technologies to be used to construct more traditional desktop-like programs. It is designed is to be a browser-less runtime for Rich Internet Applications to run on the desktop.
Unlike your traditional browser based Rich Internet Application which does not need to be installed, an Adobe AIR application is packaged, digitally signed, and installed to the user’s computer. This gives the application access to the local system services like storing and using files whereas a browser based system is more limited to how data is accessed and stored. 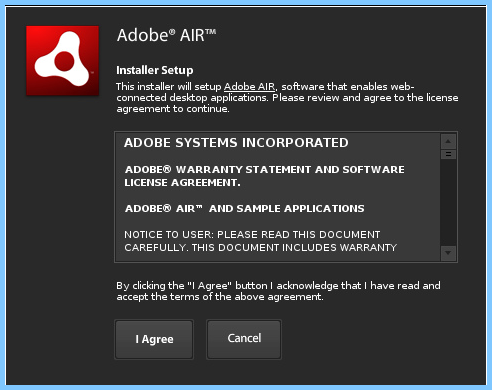 Another difference with Adobe Air applications is that they can also operate offline.  So the user can continue to work when the internet is down. Then when service is restored, the application can upload data, or provide other functionality that it would normally accomplish when connected.
The first actual version of Adobe Air was a public preview release called Apollo and was released on March 19, 2007. Three months later it was renamed to Adobe AIR and a beta version was released to the public.
In June 2008, Adobe AIR Version 1.1 was released and it supported the building of international applications. It also added support for Windows XP Tablet Edition and 64-bit versions of Windows Vista Home Premium.
Version 1.5 of Adobe Air was released in October of 2008 and it added encrypted local databases which offer better support for larger data files. It also added Flash Player 10 capabilities so it could take advantage of the new custom filters, blend modes, and fills with Adobe Pixel Bender. It also supported 3D effects. The version of WebKit in Adobe AIR was updated to the newest version which included an new version of SquirrelFish, a bytecode interpreter that improved the speed of JavaScript for common actions. If you want to build Rich Internet Applications and you want to deploy them to the desktop, then Adobe AIR is the best platform to get you there fast.  It will enable you to have your favorite Web applications with you all the time. With AIR, applications are easier, more powerful, and even more fun to use.
Download
Category: Internet
Tag: Old Version of Adobe Air
Recent Posts