Date Released: August 12, 1994
File Size: 393.00 MB
Publisher: ACD Systems
License: Trialware
Operation Systems: Windows, Mac OS, and iOS
Category: Graphic
Versions: 1.0 – 20.4
Last Updated: January 27, 2020
ACDSee is a free photo manager program with many features. Developed to work with any Windows computer operating system, ACDSee provides users with an easy to understand interface and image manager. With ACDSee you can edit images and photos, share pictures, and store and archive image files.
Previous versions of ACDSee provide greater stability and use far less computer space and memory than the latest version. Version 5.0 (released in 2005) takes up just 5.7 MB of computer memory space, whereas the latest, much more bloated version uses over 40 MB of space. The features of the older versions are similar to those offered in newer versions, but without using additional computer resources. 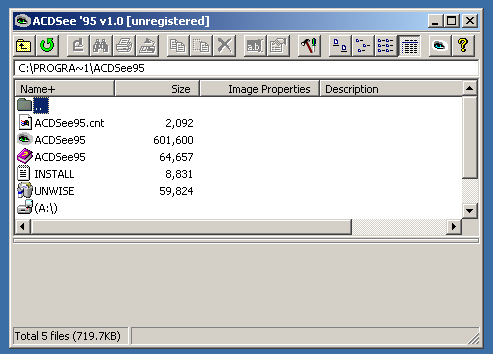 With ACDSee you can view slideshow presentations, create a HTML version of your photo gallery and view thumbnails of your pictures when browsing through the folders. ACDSee offers easy file type conversion, allowing you to change your photos or images into whatever format (for example bitmap, jpeg, tiff, etc.) you need.
You can crop, scale, and rotate the images, although the more advanced image manipulation features are not available in the previous versions of ACDSee. However, the majority of computer users want a simple way to view and store photo images and never use the advanced features of costly programs like Adobe Photoshop. If you usually only crop, scale, or rotate your images, ACDSee offers all the features you need.
ACDSee allows for image folder synchronization and photo sharing with friends through access to photo sharing websites like Flickr and SendPix. French, Dutch, German, and English versions of the program have been developed, so ACDSee is a truly international user friendly software.
Although the older versions do not have limiting clauses, ACDSee has received some criticism for the clause inserted in the agreement of all versions after Version 7.0, which states “Use, display or distribution of this Software together with material that is pornographic, racist, vulgar, obscene, defamatory, libelous, abusive, promoting hatred, discriminating or displaying prejudice based on religion, ethnic heritage, race, sexual orientation or age is strictly prohibited.”
Download a previous version of ACDSee to manage and manipulate your images and photos in a simple to use program that does not use many of your computer’s resources. ACDSee has many features and provides easy access, storage, and viewing of images in all sorts of formats.
Download
Category: Graphic
Tag: Old Versions of ACDSee
Recent Posts